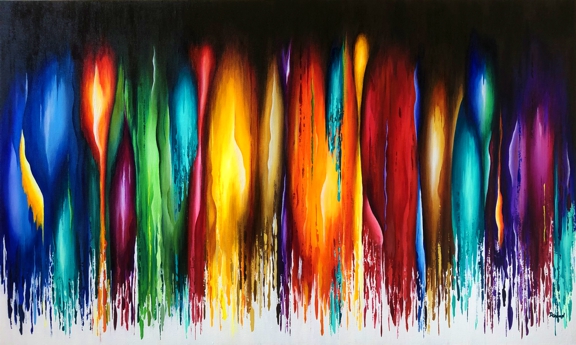 Having worked extensively as an actor, director, designer, writer, puppeteer and maker, meet the artist who’s passionate about promoting mental health awareness through all forms of art.

Darren is a London-based creator having originally trained as an actor. He received an MFA in Actor Created Physical Theatre from the London International School of Performing Arts in conjunction with Naropa University. He then became a teacher and technical director for LISPA where he focused on design, puppetry and object manipulation, construction, and the fantastical world. Alongside LISPA, Darren has also taught movement and directed at the Guildford School of Acting.

“In recent years, I have been exploring the fine arts. Using various media depending on where this neuro-diverse brain takes me— Abstract expressionism with acrylic painting on canvas, charcoal sketches on paper to figurative drawing with an iPad to designing playing cards. It sometimes becomes more of an exploration of what the materials can do.”

“In discovering & learning to deal with my own mental health (specifically Complex-PTSD & ADHD), I am passionate about bringing awareness to the wider community about mental health issues through all forms of art.”

Check out his work at www.darrengoad.com and his Instagram