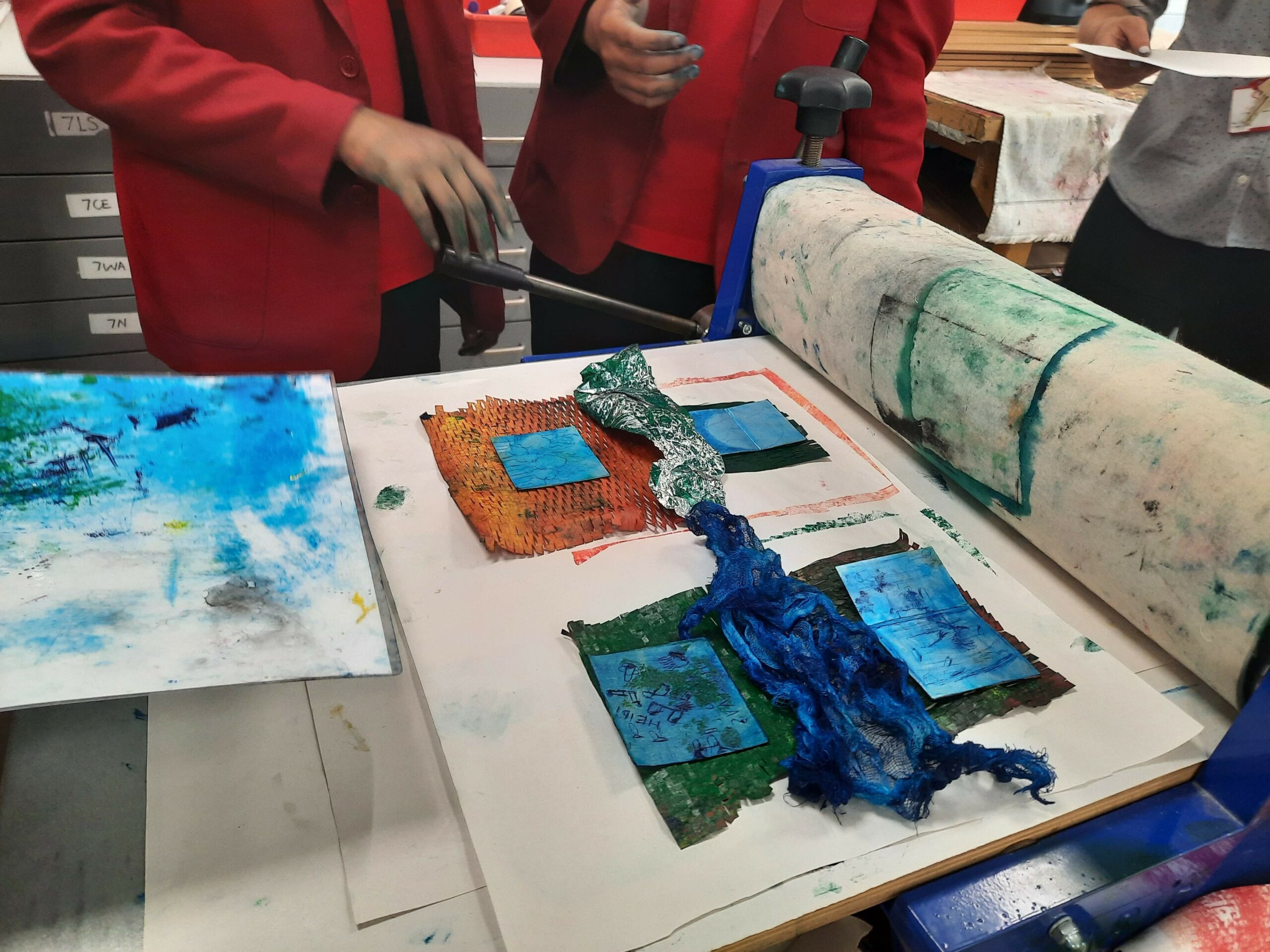 Over three days our artist educators ran process-led workshops, introducing a wide variety of new artistic techniques to the young people. The school wanted to ensure that this project would provide students with experiences they would not typically have in the classroom. Our artist educators taught students new skills whilst creating an atmosphere of fun, freedom and experimentation.

“It was great to see the students working collaboratively on large artworks. Having to work together gradually brought a lot of students who had been initially hesitant to participate, out of their shell”

First, they used oil pastels to create marks and shapes, using their bodies as stencils, filling the space with large, slightly abstracted shapes. They then added watercolour, exploring how the water-based paint reacted with, and resisted, the oil pastel marks. The young people continued to add marks using drawing ink and then charcoal attached to the end of long sticks.

The artists encouraged the students to create a sense of energy in their mark making and layering of materials. This meant the final pieces were bold, impactful and unique.

“Many students had not come across experimental drawing methods such as stick and ink before. Using alternative methods of applying watercolour led to a lot of play with the media and how they controlled (or did not control) the amount of water.”

Reza Ben Gajra and Bruce Ingram introduced concepts of architecture and public sculpture during their workshops. Reza worked with students to construct large free-standing structures to form abstract architecture of the future, whilst Bruce’s workshops focused on making a public sculpture – looking at ‘Orbit’ by Anish Kapoor in the Olympic Park as inspiration. Both artist educators required the students to explore all practical aspects of making an architectural sculpture, including planning, design and engineering.

The young people were encouraged to think outside the box and play around with the materials that were available to them, resulting in wonderfully creative outcomes.

“It is clear they understood the brief, not to be restricted and constricted by their preconceptions of ‘traditional’ buildings i.e. cubes with pitched roofs.”

Emily Hopkins and James Randell, supported by Matilda Ellis, explored printmaking with the young people. Students learnt how to produce monoprints with Emily and Matilda. Starting with drawn and stencil-based prints, they were then pushed to introduce natural objects to their printing process.

Students tried dry point engraving and collagraph for the first time with James. The young people had to work together and think critically about their printmaking, considering what worked well and what didn’t, creating new experiments based on these observations.

“The majority of the students had never tried any printmaking before and by the end of the session they were producing many different kinds of prints and taking initiative to try different combinations of techniques.”

All the artists remarked that the content of their workshops felt like a new experience for the young people where they were able to experiment and learn new skills that are not ordinarily accessible to them in the classroom.

80% of the students involved in the project said that they had learnt something new.

Amazing artwork was created in these workshops, some of which will now be displayed in the school. We were able to provide moments of joyful creativity and expression for the more than 1,000 students who participated in Swanlea’s Art Week.

Be a part of our creative school community